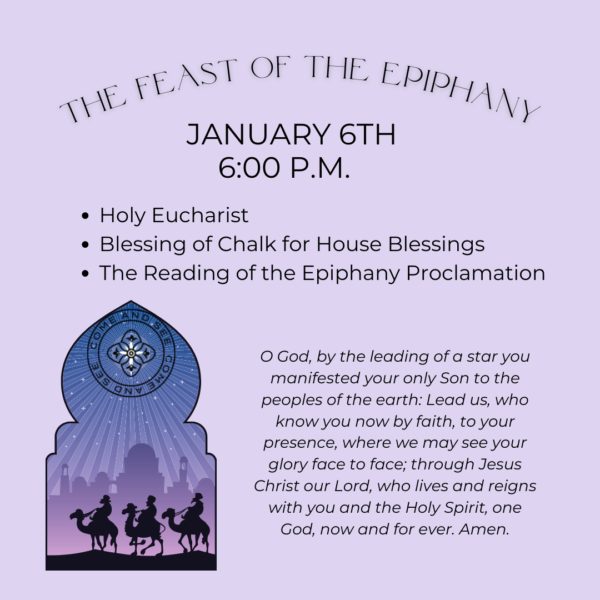 We will celebrate the Feast of the Epiphany on Thursday, January 6th at 6:00 p.m.

Epiphany comes from the Greek word epiphaino. Epi means “upon” and phaino is translated as “to shine” or “to produce light,” “to become visible, appear,”  “to become known, be recognized, be apparent, be revealed.”

When we think of the Epiphany we probably most often think of the star and the magi or wise men. But the Epiphany is a feast of our Lord’s life. It is a feast about Jesus not the star or the magi and their gifts. The star and the magi are simply our guides or pointers to Christ. The Epiphany celebrates the manifestation of Jesus’ divine nature and this takes place through his humanity. It is through Jesus’ humanity—the same humanity that is ours—that we see and experience God.

In celebrating the Epiphany we are asking God, who by the leading of a star manifested his Son to the peoples of the earth, to lead us to God’s presence where we may see God’s glory face to face, that Christ may be manifest in us, and our lives may be a light to the world. Not only are we illumined by the light of Christ we become illumination and our lives become epiphanies of Christ for each other.

What might we hear if we listened deeply in everyday life? How can we turn…

What About Camp This Summer?

From the diocesan offices: Based on information the camps staff are receiving from local, state…

The Feast of the Epiphany